Creating role-based permissions allows MetaLocator Enterprise customers to establish a custom access control model that follows their business rules. Group permissions are for creating teams, or "silos" in your organization that can work in parallel to create solutions in MetaLocator without interfering with each other.

Group permissions should not be used to separate data from different companies, or protect proprietary information, or by Agencies to re-sell MetaLocator to multiple separate customers. For complete data, log and analytics isolation and for Agencies reselling, contact us for details on the Agency model.

When a user has access to a resource via group membership, it is combined with the access according to their user Type. Groups membership can not grant access that the user Type prevents. For example, Analytics Users can only access the Analytics menu. Adding an Analytics user to a group with access to Data & Interfaces will not have any effect.

This table provides a summary of permissions by user type, explained in detail below:

A common setup for a large Enterprise aligns with the following example. This example is for a company called SampleCorp. They have two webmasters that manage most web applications and data within their organization. They have two brands, Widget and Wonket that they sell. Different teams manage the Widget and Wonket data. Wonket is sold in the US and Canada. Wonket Canada data is managed by a single staff member in Canada.

SampleCorp has the following user groups: 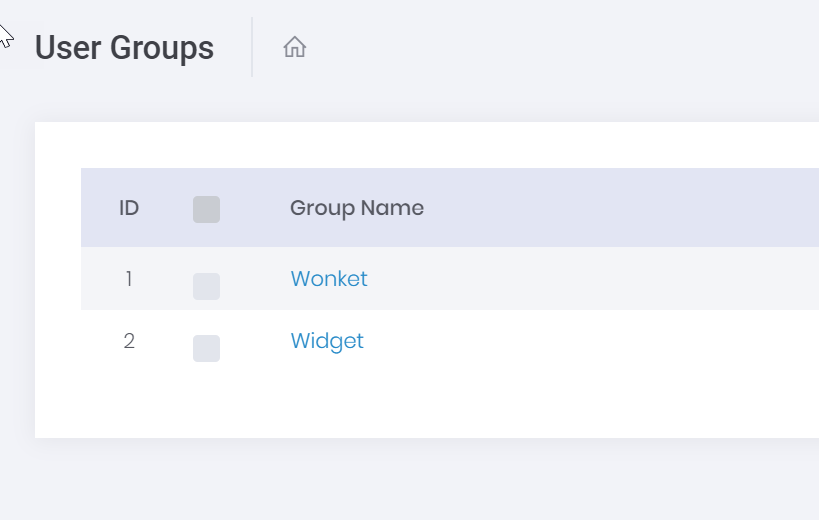 Vicky is the Account Owner. Her role is the primary business contact for MetaLocator. She signed the Enterprise contract and is in charge of the MetaLocator engagement with her company SampleCorp. Her email address was used when the MetaLocator account was created. She has access to all users, data, categories, fields and Interface settings. Her privileged access includes the ability to access billing information and the ability to upgrade, downgrade or cancel the account.

Tim & Brit are Administrators. They are Webmasters at their company. They have no groups assigned. Because they are Administrators with no groups assigned, they have access to all users, data, categories, fields and Interface settings. They can not access billing information. They also can not upgrade, downgrade or cancel the account. They can create new users and add them to any (or no) group. They can also change groups for users, data, categories, fields and Interfaces.

Nasir is a Manager. He is responsible for maintaining data for Widget Brand at SampleCorp. He collects a list of dealers every month and keeps the data in MetaLocator correct and up to date. He is in the Widget Brand group. This group has access to location records in the Widget Brand group only. Michael can not create users because he a Manager user. He can't see the Interfaces or categories because he is a Manager user. When he edits a location record, he sees all standard fields, plus a custom field that applies to only Widget Brand. That custom field was created by Adam.

When Nasir, the Manager for Widget Brand, imports data the records he creates are automatically placed in the Widget Brand group.

Nasir can not create categories, fields or Interfaces as a manager. 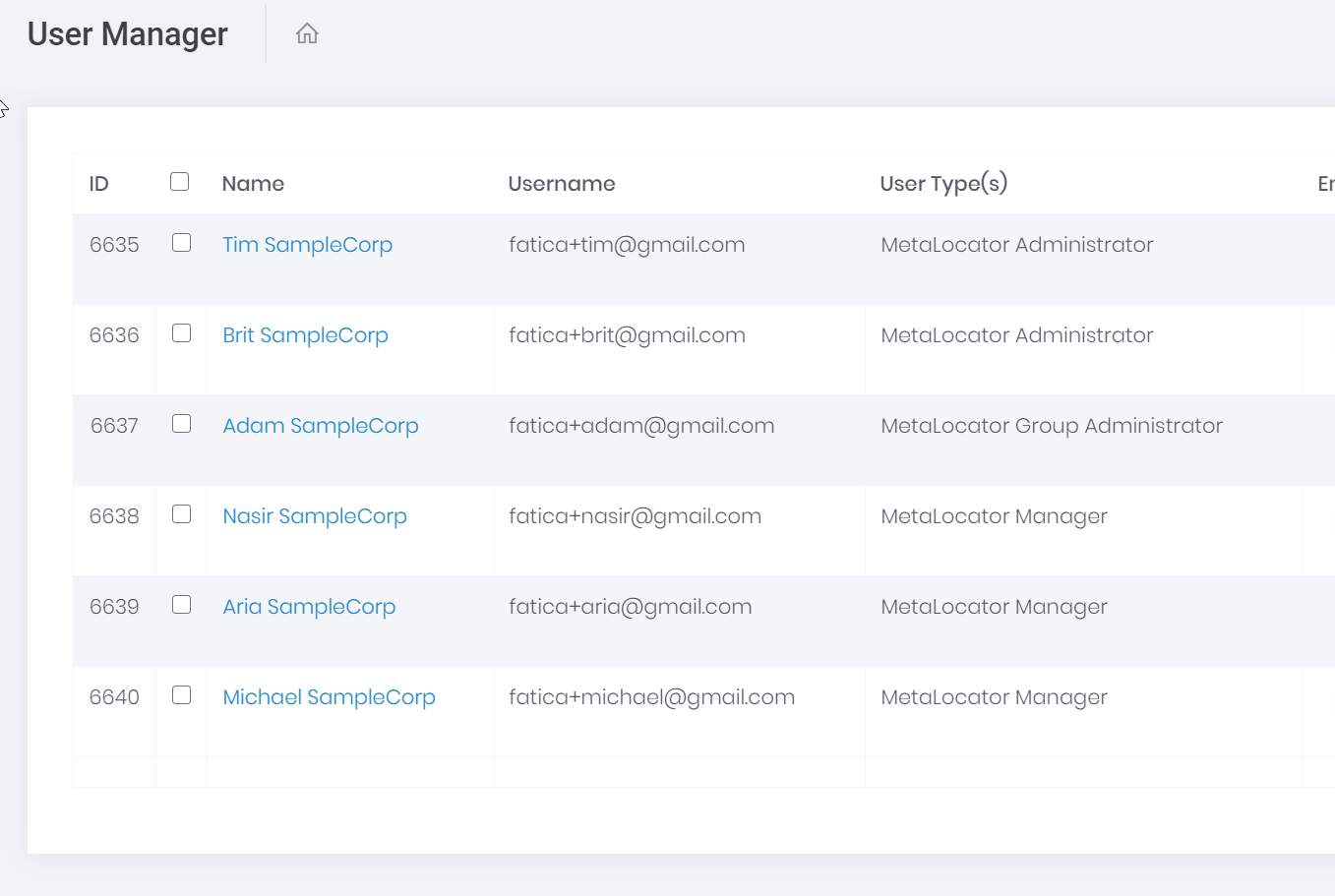 Michael's setup is shown below, notice the Country and Group options: 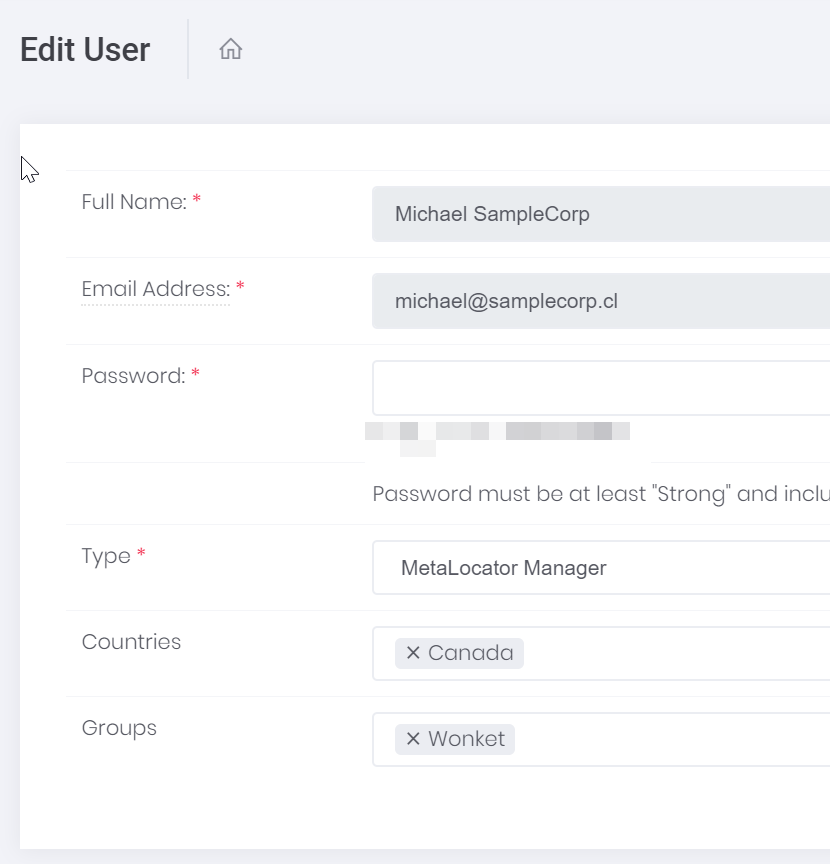 When users in groups are modifying data, they are only able to access fields according to their group membership. In the example above, Adam is a Group Administrator in the Widget Group. When he creates or edits a location in the back-end, he only sees fields in his group. In the below example, we see two custom fields, one in the Widget Group, and one in both the Widget and Wonket groups. In this example account there are other fields present in only the Wonket group, not showing to Adam because he is not in that group. 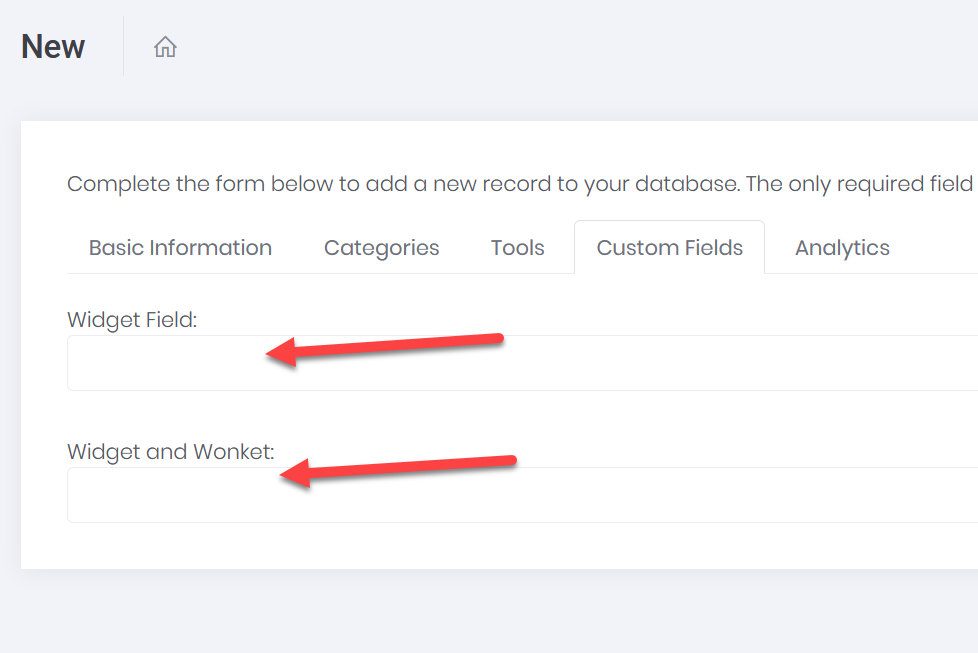 Field access can be controlled by assigning groups to a specific field as shown in the Field Details. 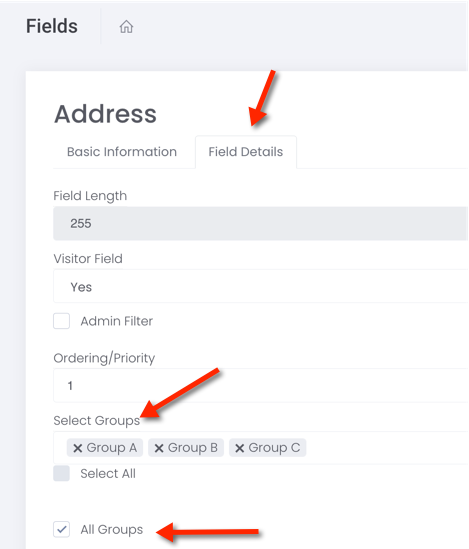 Fields can be associated with individual groups by selecting them under Select Groups. If a field should available to all groups, including any groups added in the future, check the All Groups checkbox. When this box is checked, the groups selected under Select Groups have no effect.

To create a group, go to the User Manager as shown, 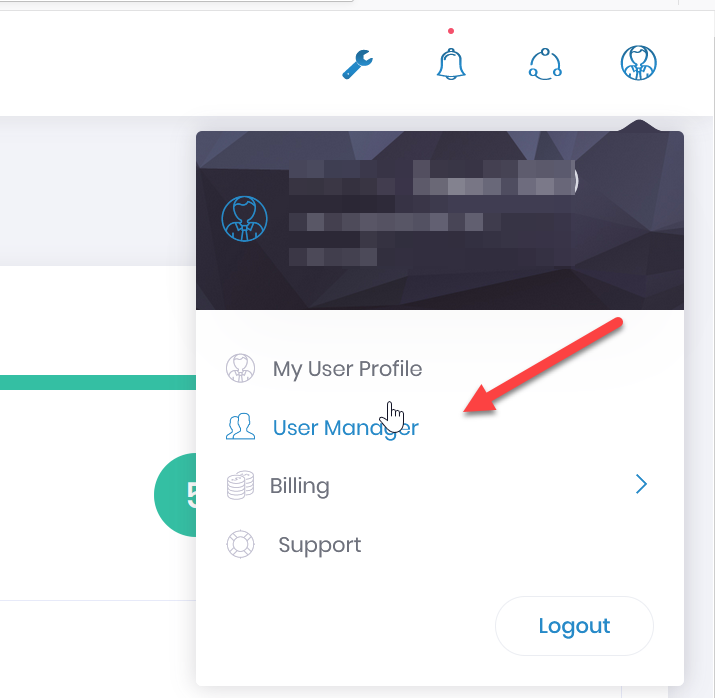 Then click User Groups in the upper right ellipses menu. That button is available to Owners, Administrators and Group Administrators of Enterprise accounts only.

Click New, and provide a group name and any required notes.

When groups are deleted, the group is automatically removed from any associated resources. Resources in those deleted groups will not be otherwise affected.

When users are deleted, the ownership record for that user is removed from any associated resources. Resources created by that user will still exist. 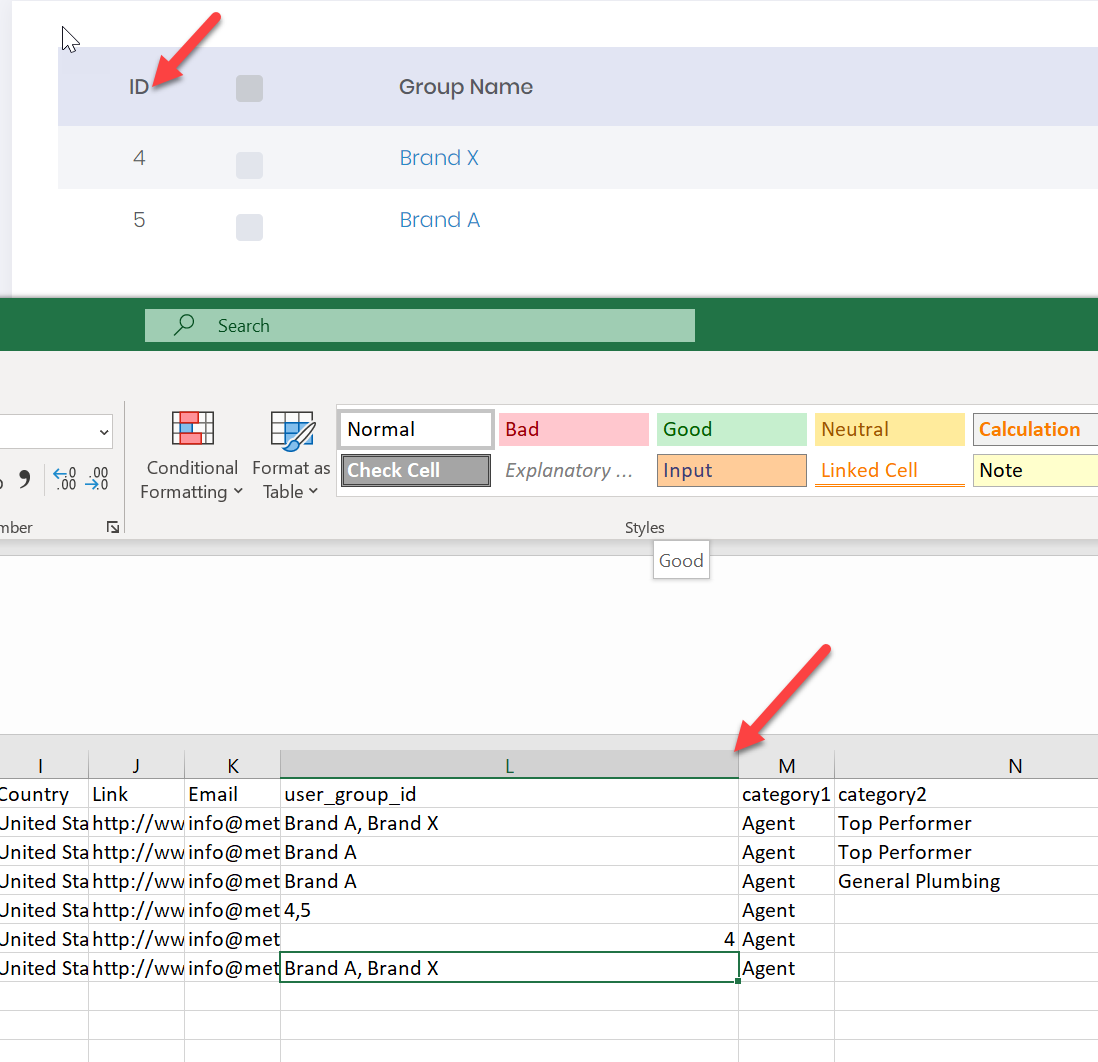 Mapping Data to Groups during Import

See this article on Import Mapping.

Interfaces can be added and removed from Groups from the Interfaces bulk actions menu. When interfaces are added to a group they

In the subsequent screen, you can choose to set groups by replacing, adding or removing the selected groups from the drop-down list.

When creating or editing categories, the Group can be set on the Category Options Tab as shown: 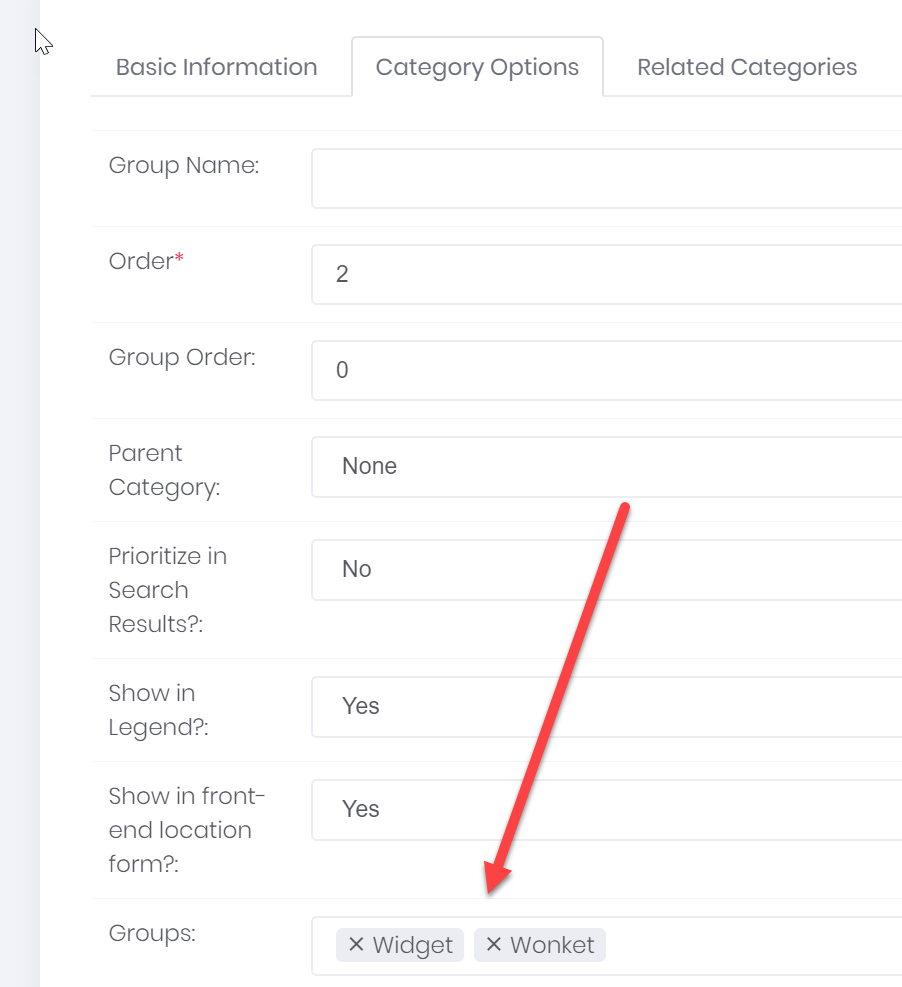 Category Groups can also be set in bulk, using the bulk actions menu