MetaLocator Teams is an Enterprise add-on developed to provide role-based permissions in MetaLocator. It enables the creation of user groups (or "Teams") which can have limited access to:

Each user group can essentially work in isolation from other groups by limiting access to the classes of data above to only those accessible to their group.

This guide provides a plan to organize your data, unique keys and users so they can be uniformly managed in MetaLocator. In this guide we assume you have a basic working knowledge of MetaLocator, especially importing data.

Key questions we will ask, answer and explore in this guide include:

MetaLocator Teams was developed to ensure large organizations with multiple divisions and users can operate independently within their groups without disturbing others. In this guide, we'll explore a hypothetical organization that has multiple divisions. These divisions will have their own locations and lists of products and services. We'll also explore the scenario where one location may exist in multiple divisions. We see this often when a dealer might provide both residential and commercial services.

Other common examples of user groups include:

In MetaLocator Teams, your chosen groups should align with the isolated use cases that require siloed data, interfaces, categories and leads. Those use cases are often aligned with the actual users who manage the solution, but not in all cases. We'll get into the Users side of things more later in this guide.

To create the User Groups, click User Manager, then User Groups. Click New and provide a name for each group. 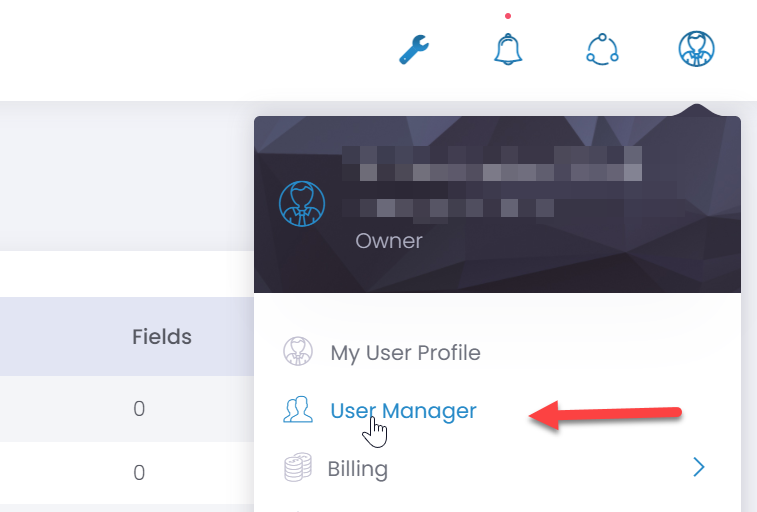 Our groups are now shown as below: 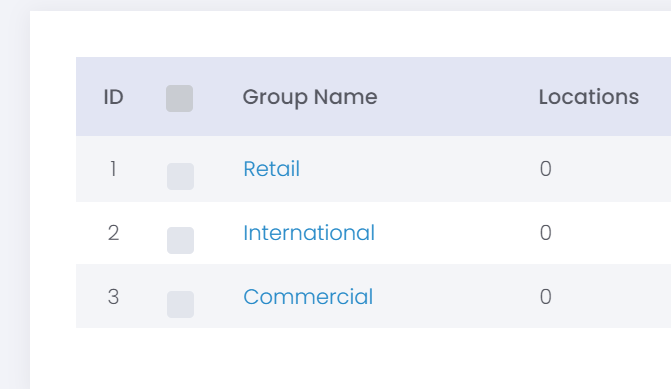 For now, we are going to import our data from 3 separate CSV files, one for each group. Later in this guide we will consider how to manage multiple data sources.

When importing data, we can control the Group of the data we're importing by using any of the following methods:

At this stage in the guide, we will use the third option above, since it is a great way to quickly populate data into multiple groups as a single user without having to do any other setup work, or login and logout of various users.

Before proceeding, ensure your account has an external key field configured. If you're following this tutorial along exactly, our key field is named StoreNo.

We will import each using the following process: 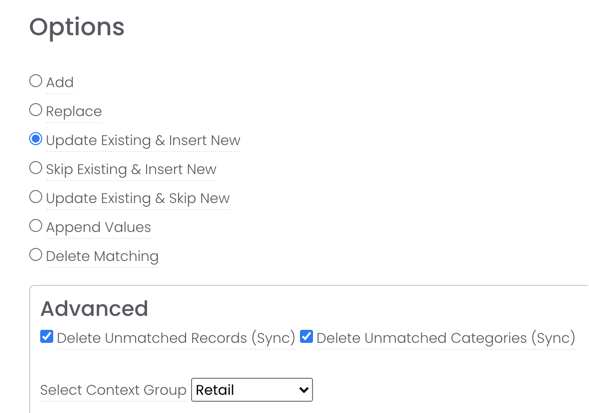 These option choices ensure the following:

After import, under Locations > All Records, the user groups will be populated accordingly.

The categories are also automatically created within the target user group. 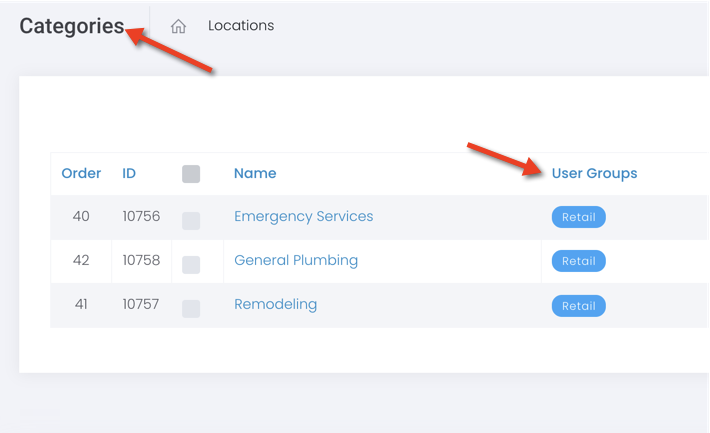 It is critical for MetaLocator to be able to uniquely identify a record during import in order to support bi-directional synchronization. The External Key field is the unique identifier that enables this essential behavior. It provides for the safe identification and deletion of records during bulk import operations. All teams share the same, single external key column.

The external key column, called "StoreNo" in our examples so far, must be unique across all rows in MetaLocator. In a Teams setup it is common to have data coming from different systems or sources. In practice, we see the following scenarios:

In scenario 1 above, the key is provided in the data, and should be mapped to the single external key column in MetaLocator during the import.

Scenario 1 is ideal because it minimizes duplication of location data, which:

In scenario 2, we have a few challenges to consider:

To address these challenges, we can introduce a new field in MetaLocator, and a corresponding column in our data for use in a Composite External Key. The column can be called "segment", or "division" and may contain similar values to our Group choices as shown below: 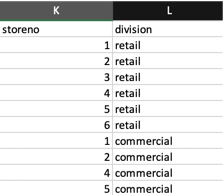 This allows users to assign any key value to StoreNo so long as it is unique within their division.

The StoreNo field becomes a regular text or integer field and a new external key field is created referencing storeno and division as its components. 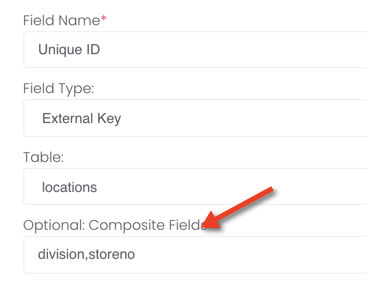 The new UniqueID column is not managed by your users or included in the data import. It is dynamically assembled by MetaLocator during import based on the values of division and storeno and visible as read-only. It is unique across all divisions and allows users to create and assign unique values to storeno according to whatever method they deem fit based on their data source. For simple spreadsheets this could be an auto-incrementing field, so long as it is unique by row and consistent, meaning the numbers, once assigned to a location are not re-assigned later arbitrarily.

Properly establishing recurring background data import jobs is an important step along the way to a successful, sustainable deployment of MetaLocator. These jobs can regularly connect to your external data sources and pull in data. Jobs can be established by a central Administrator user, or they can be created by individual Group Administrators.

Establishing jobs as a single Administrator user provides for centralized management of data importing and ETL tasks. This is commonly a centralized consideration in organizational structure, e.g. it is handled by the IT department. However, when there are multiple data sources and the credentials for those sources are not centrally managed, it can be a difficult task for a one user. One common example is where users manage data in Google Sheets, and each sheet is owned by a different user. In order to centrally manage that data, the sheets should be shared to the Google account of an administrator who then establishes the import jobs.

If a single job imports all data by a single Administrator, then the Group of the row must be established by the data in a UserGroupId column or by an import mapping rule as described above.

If one Administrator is creating multiple background jobs, in addition to the data-driven options described above, the Administrator can configure the job to run under the Group Context of the target group. This is configured when performing the import and choosing the appropriate Group Context from the Import Options screen. The Administrator can also choose a user to run the job as, which is controlled by the user_id parameter of the job settings. The value should be set to the user id of the intended user, typically a Group Administrator in this context.

One downside to delegating the creation of import jobs to Group Administrators is that the schedule of the data import can become scattered if not well maintained. For example, Retail data gets imported every 3 hours and Commercial data gets imported every day at noon. Sometimes that is desirable and appropriate, however; having a consistent schedule across all data sources can be easier to manage. Regardless of who creates the job, the job settings, including the schedule can be altered and aligned by an Administrator.

It is critical that the External Key strategy is commonly understood and validated as described above if data importing is to be successfully delegated and managed by individual Group Administrators. When a new Group Administrator is created, they receive an automated invitation which includes a downloadable import template. The template will include columns for the custom fields established in the account:

The template and email does not include information regarding how to populate key columns, you will want to communicate that information in the welcome message option when creating the account, or however you chose to communicate with your team members. Regardless of what these users do during an import, if the validation is established on the key field(s) and their access is limited to their group, the impact of any bulk actions will be similarly limited.

MetaLocator Teams introduces the Group Administrator and Group Manager roles. These users are limited to accessing the data, categories, leads and Interfaces of one or more groups.

The most common implementation in MetaLocator teams is to have one Group Administrator within each group that can create Interfaces and Categories for the group. Then, within the group there are Managers who can import and update data. One additional consideration is country managers. These are managers that are limited by group and a country. This is useful when team members manage data for a specific country and their contributions should not influence outside their country.

Above the Group Administrators you can position an Administrator who has access to all groups. This is typically a centralized IT role, like a database administrator or IT manager that is commonly assigned tasks that can influence the entire Enterprise.

Some groups might have access to certain fields that only relate to their area. Access to a field quite simply controls whether it is available to edit when importing data or when manually editing data. This conveniently limits the size of the form to only fields that matter to that user when editing a location. Similarly, when importing and exporting the columns are limited to those which matter to that group.

Address fields, like city, state and postal code are normally shared across groups, however that sharing must be explicitly set in the field settings for each field. Certain system fields like latitude and longitude, published state, name and type are accessible to all groups.